Electric arcs produce some of the highest temperatures known to occur on earth - up to 35000 degrees Fahrenheit or 19500 degrees Celsius. This temperature is four times higher than the temperature on the surface of the Sun. The intense heat from an arc causes sudden expansion of air resulting in a blast. Copper expands during an arc flash event at a factor of 67000 times within a few milliseconds. 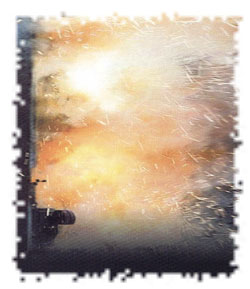 Because the chest and face area for most workers make up nearly half a square meter of surface area, a worker could easily be blown off his feet or somersaulted during an intense arc flash explosion. As an example, a 50kA arc would provide enough pressure to propel a person standing 2 feet away from the arc source and weighing 75kg (170 lbs) with acceleration of approx 100 meters (330 feet) per second square.

where,
P is pressure in lbs/ft2
Iarc is arcing current in kA
D is distance from arc in feet

Arcing current Iarc can be calculated using ARCAD Arc Flash Analytic software or the IEEE 1584 formula 5.2 and substituted in the above equation or arc blast pressure calculator below:

Energies produced by arc flash explosions are comparable to dynamite explosions. These forces can be significant. They have been known to blow workers tens of meters away from the arc causing falls and injuries that may be more severe than the burns themselves.