A high current fault can create an electrical explosion by forming a high energy arc flash which rapidly vaporizes metal and insulation material. An electrical explosion is the sudden release of energy due to a short circuit between power phases or a phase to ground. It is important to realize that a very large amount of energy is available on the bus of most electrical panels when they are operating within their normal design parameters. For example a phase to phase short circuit on a 400 Amp, 120/208 Volt panel can instantaneously release over 100 kilowatts of energy during a fault condition and not blow the protective fuse or circuit breaker. An electrical explosion of this magnitude will destroy the panel and can start a fire causing severe injuries or even death.

Far more serious electrical explosions occur when a short circuit causes the collapse of the magnetic field in the transformer feeding the building. When this happens, there is an instantaneous release of the energy stored in the transformer in the form of a fault current. The most important aspect of designing an electrical system for a building is to make sure that the protective fuses and circuit breakers are capable of handling the maximum available fault current. When fault current ratings are exceeded circuit breakers weld together and are unable to clear the fault. 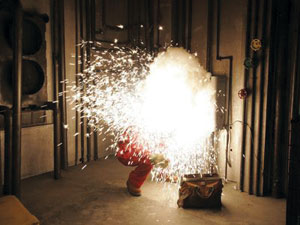