How to read one-line diagrams

We usually depict the electrical distribution system by a graphic representation called a single line diagram (SLD). A single line can show all or part of a system. It is very versatile and comprehensive because it can depict a very complicated three-phase system.

We use universally accepted electrical symbols to represent the different electrical components and their relationship within a circuit or system. To interpret one-lines you first need to be familiar with the electrical symbols. This chart shows the most frequently used symbols.

To explain this easier, we have divided the single line into three sections.

The diagram below was created using free online diagram maker located at www.draw.io The draw.io online is a free-to-license web application for everyone. It is free for any usage, there is no premium pay-for functionality, watermarking, etc. You own the content you produce and may use it for any purpose. You can store your draw.io projects in .xml format on your desktop, in Dropbox or Google Drive. Whichever storage option you select, when you start draw.io, you will always be presented with a screen asking whether you want to create a new file or open a new one.

Although draw.io provides an extensive set of default libraries, there may be times when you would like to use symbols that are not provided. Provided you are able to locate and use the relevant symbols, you can incorporate them into a custom library, which can then be used in the same way as any of the existing default libraries. Check draw.io user manual and online tutorials for basic and advanced options. 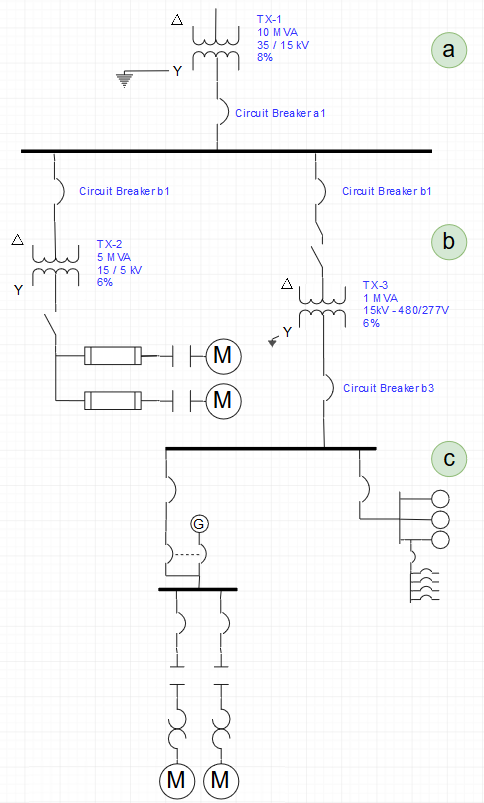 Following the drawout circuit breaker (a1) from the transformer, it is attached to a heavier, horizontal line. This horizontal line represents an electrical bus, which is a means used to get electricity to other areas or circuits.

You will notice that two more removable circuit breakers (b1 and b2) are attached to the bus and feed other circuits, which are at 15kV, since there has been no indication of voltage change in the system. Attached to the removable circuit breaker (b1), a step-down transformer is used to take the voltage in that area of the system from 15kV down to 5kV.

Now locate the second removable circuit breaker (b2). This circuit breaker is attached to a fused disconnect switch and it is connected to a step-down transformer. Notice that all the equipment below the transformer is now considered low voltage equipment, because the voltage has been stepped down to a level of 600 volts or lower.

To the bottom left and connected to the bus is another fixed circuit breaker. Look carefully at the next grouping of symbols. Do you recognize the automatic transfer switch symbol?

A low-voltage motor control circuit is attached to the automatic transfer switch through a low-voltage bus. Make sure you recognize these symbols. Although we do not know the exact function of the low voltage motor control in this circuit, it is obvious that it is important to keep the equipment up and running. A written specification would normally provide the details of the application.

On the right side of the third area there is another fixed circuit breaker connected to the bus. It is attached to a meter center, as indicated by the symbol formed by three circles. This indicates that the electric company is using these meters to keep track of power consumed by the equipment below the meter center.

Below the meter center is a load-center or panel-board that is feeding a number of smaller circuits. This could represent a load center in a building that feeds power to the lights, air conditioning, heat and any other electrical equipment connected to the building.

This over-simplified analysis of a one-line diagram gives you an idea of the kind of story such diagrams tell about electrical system connections and equipment. Just keep in mind that although some one-line diagrams may appear overwhelming by virtue of their size and the wide variety of equipment represented, they can all be analyzed using the same step-by-step method.